Non-stick and cast iron pans and skills are the two most popular options when cooking today. Both have their place and it’s important to understand when one is a better option than the other.

In this short guide, I’ll explain the important differences between non-stick and cast iron so you know exactly which to use in any situation.

What is non-stick and cast-iron

What non-stick pans are made of

A non-stick pan or skillet can be made of a variety of metals but are usually made out of carbon steel, stainless steel, aluminum, or copper. But it’s not the metal that matters when it comes to non-stick pans, it’s the coating.

The coating that makes a non-stick pan so easy to use is called polytetrafluoroethylene (PTFE). Roy Plunkett and DuPont invented this coating in 1938 and trademarked it as Teflon.

The Teflon coating on a non-stick pan creates an incredibly smooth surface that allows you to cook food in the pan without it sticking.

What is a cast-iron pan

Cast-iron can be thought of as the original non-stick pan. When you buy a cast iron pan from the store, it will likely have a fairly rough surface that food will stick to like glue.

Here’s the surface of a brand new cast-iron pan: 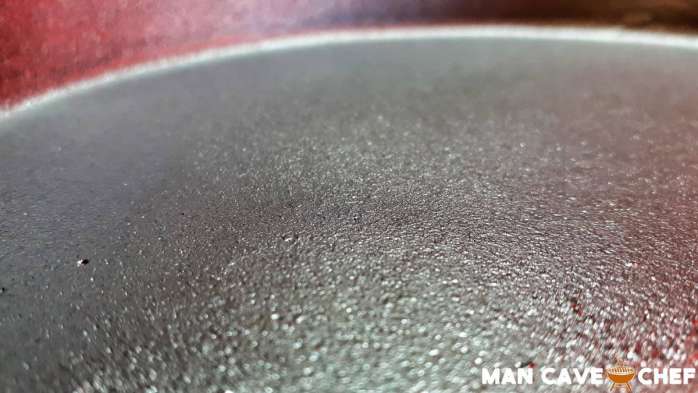 Fortunately, we can turn this rough surface into a surprisingly good non-stick surface by ‘seasoning’ it.

Seasoning is the magic that turns cast iron into a major pain into a delight to use. Whenever you hear somebody complain about food sticking to cast iron, it’s because they haven’t properly seasoned their pan.

I explain how to properly season a cast iron pan in my Ultimate Guide on Cast Iron. Check the guide out to learn everything you would want to know about cast iron including myths people still believe today.

The basic idea is that we can cover the surface of a cast iron pan in a thin film of oil and heat that oil up past the smoking point. This polymerizes the oil and creates a non-stick surface.

So while technically speaking a cast iron pan is a non-stick pan, we tend to only call Telfon coated pans ‘non-stick’.

The most important difference when cooking with non-stick or cast iron is the heat they can handle.

Cast iron pans can handle an incredibly high level of heat which is perfect for creating a good sear on meat. The cast iron is slow to heat up, but it holds the heat well as needed.

When you heat a non-stick pan above 500°F, the Teflon coating starts to break down and release toxic fumes (releases perfluorooctanoic acid – PFOA).

There are a lot of concerns over the possible negative health effects of PTFE coating (Teflon), especially when it is overheated.

The problem is it is quite easy for a non-stick pan to surpass 500°F due to the thin metal usually used. A couple of minutes of pre-heating your pan and it will heat up to the point where it starts producing fumes.

As a general rule of thumb, only use non-stick pans for low-temperature cooking.

Pancakes are a great example of something a non-stick pan does a great job at. Pancakes don’t need a high temperature to cook, so you can easily cook one and make use of the non-stick coating to effortlessly flip them.

Cooking a steak or a smashed burger (link to recipe) on a non-stick pan, on the other hand, is a terrible idea. Not only does a non-stick pan struggle to give a good sear, but heating the pan up enough to get it to sear the meat easily surpasses the temperature where the coating starts producing toxic fumes.

If this is the first time you’ve heard about the toxic fumes that result from overheating a non-stick pan, you might wonder whether non-stick pans are safe at all.

If you heat a non-stick pan above 500°F, then there is a clear health risk. Even newer pans that don’t use PFOA during the manufacturing process still pose similar risks.

If you never heat your non-stick pan near 500°F, the health risk is unclear.

Normal use of a non-stick pan could be harming us or it may be perfectly safe. This is an extremely difficult problem researchers have been trying to understand and it seems there is no clear answer yet.

The best practice is to only use non-stick pans at low temperature and use non-stick safe utensils. Scratching the coating can result in flakes of coating ending up in your food, which may pose different health issues.

As soon as you notice your non-stick coating is starting to fail, it’s time to replace your pan.

While the heat tolerance of the pan is the most important point to consider from a health and practical point of view, it’s important to look at the maintenance and lifespan of the pans.

If you are careful with the utensils you use in a non-stick pan, the pan should last a few years without needing to be replaced.

Using a metal spatula on a non-stick surface will ruin the coating and start to cause problems. Countless people have picked out black flakes in their food only to realize it wasn’t pepper but flakes of Teflon.

If you use a non-stick pan, it’s crucial that you treat it was care and are gentle with it with any utensils. The sooner that coating starts to fail, the sooner you need to replace the entire pan.

As explained above, you also need to be very careful that you don’t overheat the pan. The coating will quickly break down if overheated for too long.

Cast iron does take a lot more effort to maintain when compared to a non-stick pan, but the benefit is it will last you a lifetime.

You can pick up a second-hand cast iron pan at a garage sale and with a bit of effort, you can restore it to something that will likely be better than a brand new cast iron.

The maintenance involved with cast iron comes down to proper seasoning and care. After you set up the initial seasoning on your cast iron, only minimal maintenance is required to keep the non-stick surface working.

There are a lot of myths when it comes to cast iron maintenance, so I recommend reading through my Ultimate Guide on Cast Iron to avoid falling for them.

Key lesson: non-stick is easier to maintain but will only last a few years at best. Cast iron takes more effort but lasts a lifetime.

Should You Get Non-stick or Cast Iron?

There is a place for both types of pans. The right answer for you is to probably have both and use each one for what it does best.

Non-stick pans are great for cooking eggs, pancakes, crepes, omelets, or anything similar that can be cooked in relatively low heat.

When it comes to non-stickiness, non-stick pans win when compared against cast iron. While a cast iron pan can get a really good non-stick coating with proper seasoning, it still doesn’t match what is possible with a good quality non-stick pan. I love using my cast iron, but you can’t compete with good materials science.

Hopefully, this short article gives you an idea of why answers to questions like this are never black and white. When comparing two options like non-stick vs cast-iron, it’s never one or the other. Each will always have their own pros and cons.

Now that you understand the limitations of each type of pan, you can make a better decision on which is right to use for a given situation.

If you use a non-stick pan, here are some tips and best practices to get the most out of it:

If you keep a non-stick pan in the safe temperature zone and take good care of it, you’ll get the most out of it. While the lifetime of a non-stick pan is short, using best practices ensures you get the longest life out of it as you can.

Read through my Ultimate Guide on Cast Iron for detailed advice and best practices. Here are some basic tips to keep in mind:

The more you learn about the tools and equipment you use, the better results you can get out of them. Spending time reading articles like this one helps you avoid common mistakes I see all the time in other people’s cooking habits.

If you do get a cast iron pan, check out my step-by-step recipe for Smashed Burgers for something quick and easy that makes great use of the cast iron’s qualities.

You now know more than most people do about non-stick and cast iron pans. Next time you want to cook something, have a think about which type of pan would better suit the situation and make sure you have proper tools to take care of your pan.